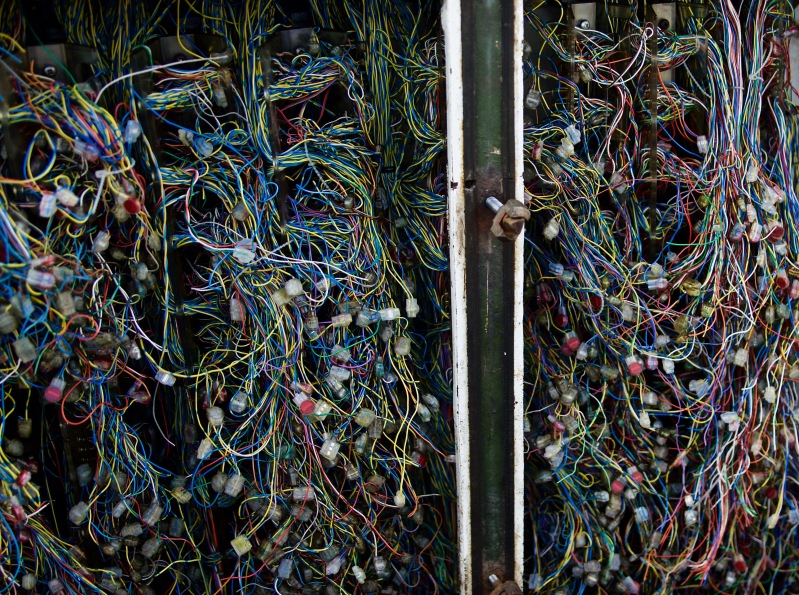 I was engaged in one of my regular walks around Sheffield*, on that particular day with my wife Wilma, when I came across John a BT engineer working to connect a line outside the Grind Cafe in Kelham Island. The cabinet was open and I took this photo of the myriad complexity of wiring that John was making sense of to connect a local property to the network. All of this was a question of logic and numeration, he told me, as he pointed out how each bundle of wires was numbered and in clumps relating to a set of addresses. His logic didn’t quite work, as he noticed a break in the sequence,  but his expertise kicked in and he discovered the necessary wiring to connect up a lady and her life to the network giving her broadband, phone perhaps even TV.

The walk continued and Wilma and I tramped on past the Kelham Island Tavern – winner of numerous great beer awards. John the BT engineer had spoken to us for some time and we realised he knew a Vicar that I knew and lived in a part of Sheffield that I grew up in. The priest was actually someone I had seen only the week before, and I realised I knew, clearly, the world that the engineer was describing. Sheffield has the reputation for being a city that is really a coming together of a series of villages with a small city centre and thus you  will nearly always meet someone you know in what we call town. What I have experienced on this day is one remove from that; the rippling interconnectedness of my relationships.

I was asked recently to help with an installation for a project in The Festival of the Mind (a Sheffield University initiative), its aim was to create a virtual Hole in the Road. The Hole in the Road was an iconic underpass in Castle Square right in the centre of the city, built in 1967 and finally filled in the 1990’s. I was asked to collect audio memories to be played into the ears of those who donned the VR headsets and wandered the recreated underpass with its fish tank and kiosks. An article was placed in the local papers, tweeted and facebooked and I waited for the promised numerous email responses that did not materialise. In the end I had to do the ordinary legwork of the researcher, ringing people, following up connections, asking people I was related to. I ended up with a strong collection of recorded memories by doing the shoe leather graft.

It taught me a lesson, again, about connectivity, whatever we think of all the new media we hold in our hands on our phones, tablets and laptops. Each birthday my Facebook friends celebrate is trailed to me and I am asked to send them a message of felicitation. The first time it happened to me, I have to admit to feeling extremely popular when the messages flooded in. Nice as it was I realised that compared with the time, on my fiftieth birthday, my daughter Eva made a secret dash home from London to be there for a meal in a local restaurant, it was small beer. Human contact, living, breathing encounters are what make us come alive.

Walking the streets has realigned something for me about place, that is the reality that what I witness on foot, slowly and deliberately, is like another universe from the one I see from a vehicle. I have also noticed over the last few walks one sound that pierces the ear over and over again; sirens. These scalding sounds are ubiquitous, and they are mainly from ambulances and paramedic transports. Each time I hear them I think about the emergency that they are the signifiers of, the life altering moments they frequently herald. Having been in a few during the height of my anxiety two years ago I picture the scene inside, the monitors, the green uniformed reassurance and care. The wonderful web of connectivity that makes up our NHS as it embodies the kindness of strangers. How the arrival at A&E will summon any available loved ones and how both medically able strangers and deeply concerned friends and family make up a web of healing and generous presence.

The time we spend investing in this invisible web of relationship and connectivity, actual physical and emotional presence with and for each other is what really makes us aware our value and worth in the world. The real world wide web is made of time spent on slow walks and on quick trots with our dogs, in coffee shops and homely kitchens, in soft conversations and briefly held hands, in falling out and making up, in shared cinemas and book clubs, in bright glades and grey streets, and most of all in being open to real human contact.

*I am doing a Phd in creative writing entitled the Poetry of Place – A Poetic Exploration of the Current State of Sheffield in South Yorkshire’. As part of this I take regular walks around the city, always beginning where I left off the time before. I follow my nose and then write up a walklog. It is a way of picking up found images and metaphors and weaving them into a poetic chronicle of my city.

This site uses Akismet to reduce spam. Learn how your comment data is processed.